The Preble County Jail was opened in 1994 and houses a total of 70 inmates; 60 male and 10 female. The jail is staffed by the Jail Administrator, Major Dean Miller, five supervisors who hold the rank of sergeant, and 17 corrections officers. The jail also employees a full time nurse, and has a contract employee for mental health issues.

Also employed at the jail is a reimbursement coordinator. This person is in charge of all inmate funds and the collection of "pay for stay" and other charges the Sheriff is allowed to collect from inmates housed at this facility. Examples of items charged to inmates are; medications, doctor visits, commissary items, and haircuts. The status of the inmate and his or her financial ability to pay will dictate when the inmate may be charged for these and other services. 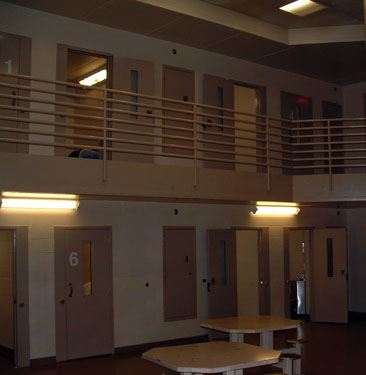 Certain classes of inmates, who meet pre-determined criteria, may be assigned the position of inmate worker. These inmates assist in laundry, food delivery, cleaning and other general duties within and without the facility. These inmates may occasionally receive special privileges for good behavior and performance.

Sheriff Simpson strives to maintain an orderly, well run correctional facility, while recognizing the rights of the inmates incarcerated within the facility. We follow closely the Ohio Minimum Jail Standards, and receive excellent marks each year from the Bureau of Adult Detention, who annually inspect the jail.

For information on rules and policies of the jail, please visit the Jail Information page.